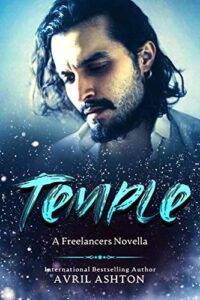 Temple still feels the pain and guilt of the night his best friend was killed on a job that went sideways. Henry was the closest thing to a brother Temple ever had. They grew up in a group home together and later worked with a group of mercenaries, taking jobs that no one else would. It was Temple who convinced Henry to take that one last job and it was Temple who had to tell Henry’s inconsolable fiancée Vik, that Henry was never coming back.

Two years later, Temple finds himself back in town during the holidays, and it’s by chance that he gets coffee at the shop that Vik owns. They finally have a chance to clear the air and Vik apologizes for the accusations he made that night. He doesn’t hold Temple responsible for Henry’s death.

After a few days, they both reach a comfortable place together – a new normal. But now Temple has something else to feel guilty about, his desire for Vik.

One night he invites Vik over for pizza and a few beers. They settle in on the couch and watch a Christmas movie and they explore their feelings with a scorchingly sexy kiss. It’s late, and it’s snowing out, so Vik decides to spend the night, but ends up sleeping in Temple’s bed alone. Their attraction is undeniable, but are their feelings a betrayal of the man who meant so much to them?

To answer that question, Temple goes to see Vik and hash out just what exactly it is that each of them want. What they each need is each other. Temple temporarily sets aside his guilt and unleashes his intense primal need for Vik, taking him on the kitchen counter, and later on the couch.

After their remarkable night, Vik knows he wants more, but is concerned with the radio silence from Temple. Does he not feel the same way?

Yes, he most definitely feels the same way, but is still grappling with what he and Vik being together would mean. It’s then that a former collogue offers him a job opportunity. Walking away from Vik would mean he wouldn’t have to deal with the pain of his past.

When Temple tells Vik about the job, Vik begs him not to leave, something he wishes he’d done with Henry in a nearly identical situation two years earlier. Vik doesn’t need to worry though, Temple said no. Henry wouldn’t want them to remain unhappy and staying miserable is no way to honor his memory.

They visit Henry’s gravesite on Christmas eve, secure in the knowledge that their future is with each other. For the first time, in a long time, Temple and Vik have something to look forward to.

Now, normally I would say that ending a romance with a visit to a cemetery doesn’t exactly scream happily ever after. But for these two characters, it makes perfect sense. Vik and Temple share the traumatic loss of someone who was an important part of their lives, and ending the story in this way shows that, while there is still grief (it’s not something they can just ‘get over’), they are moving forward and starting to live life fully once again.

Kudos to Avril Ashton for writing such a deeply emotional romance that explores the themes of grief and guilt without veering into dark melodrama. I’m not a huge fan of angsty romances. What I thought was so great about this story is that it honestly deals with the pain these characters feel, but doesn’t dwell on it. Temple and Vik aren’t the ‘woe is me’ type. They work hard to figure out the emotionally complicated situation they find themselves in. Their HEA is hard fought and well deserved. Also, their sexual chemistry happens to be off the charts. Seriously, the loves scenes are scorching. So, if you’re looking for a story with lots of heat, that doesn’t scrimp on emotion, then this is definitely the romance for you.

Temple is the novella-length start to the Freelancers series.