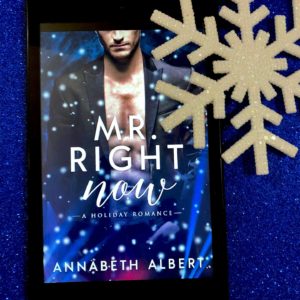 Big, brawny, nice guy ex-marine Russ gets dumped the day before Thanksgiving. The problem – his now ex-boyfriend was going to prepare the holiday meal for his family.

Enter handsome nice guy former actor Esteban, who decides to do the charitable thing and give his clueless neighbor a hand. They prepare the meal together and when Russ’ family arrives early, a simple misunderstanding leads them to believe that Russ and Esteban are a happy couple.

The sting of getting dumped is still (understandably) fresh for Russ, so they play along. The meal goes incredibly well, and Esteban discovers that he really enjoys playing Russ’ pretend boyfriend. In fact, everyone there thinks they make the perfect couple.

Including Russ’ boss Connie. He wants a promotion, to become a designer in her kitchen remodeling firm. Esteban’s kitchen re-design will serve as a test of his abilities and whether he can handle a job with real world challenges.It also behooves Esteban to impress Connie who, as a local business owner, might be willing to donate to the Literacy non-profit he works for.

So fake relationship it is! Pretending to like each other doesn’t prove particularly difficult for our heroes.

Next, we enter the part of the book that is all about nice guys, being nice, doing nice things. I know ‘nice’ doesn’t sound particularly engaging or exciting, but trust me, these two are sooo damn cute together!

They make dinner together one evening (fish tacos), Russ helps make Esteban’s gala fundraiser a success, Esteban is the perfect supportive boyfriend at Russ’ holiday work party. It’s all cute and romantic and it completely satisfies my kink for nice guy/cinnamon roll heroes.

When Russ is finally ready to show Esteban some of his kitchen concept designs, they celebrate with a kiss… and mutual blow jobs. They definitely have chemistry together, in the bedroom and out. As they continue to spend more time together, they continually keep putting off the plan to ‘break-up’ their fake relationship.

After Xmas eve with their respective families, they spend their first night together, Esteban ‘unwrapping’ Russ, the only gift he really wants. It’s amazing and perfect and afterwards the pillow talk turns serious, Russ knows what he wants and is ready to say it. Esteban is the one who becomes gun shy. They’ve only known each other a few weeks, they can’t be in love! If he can’t acknowledge how he really feels, then Russ is secure enough to walk away.

This is a romance, so Esteban quickly comes to his senses so that they can live their HEA together. A wonderful epilogue showing our happy couple one year later on New Year’s Eve wraps the story up in a sweetly romantic bow.

Mr. Right Now by Annabeth Albert is a perfect holiday romance that executes it’s fake relationship trope flawlessly. It’s no secret that this is one of my all-time favorite tropes and the way the author naturally builds the emotional connection and romantic attraction between the heroes is swoon worthy.

Annabeth Albert has a way of creating characters who are nice, thoughtful, and lead with kindness. Heroes you can immediately empathize with and fall for.

This review originally appeared as part of the BigGayFictionPodcast.