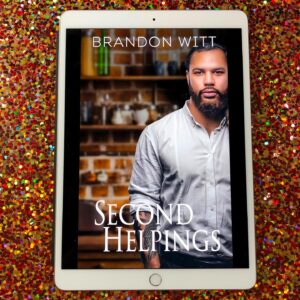 Second Helpings, the novella by Brandon Witt, packs a novels amount of real emotional punch in just a few pages.

Isaac returns to his small Missouri hometown for his 20th High School reunion. He’s about to ditch the pot-luck get together (yup, it’s that downhome) when in walks the reason he came, Grant.

Isaac and Grant were inseparable growing up, but the day after graduation, Isaac left for New York. Grant stayed behind.

They drive around town together, getting a cherry limeade at the drive-in. All the years away from each other slip away and they head back to Grant’s place.

The next morning, Grant treats Isaac to breakfast in bed and convinces him to stay just one more day. They hang out, eating at the diner Grant runs with his sister. Their time together is nice, but Isaac can’t help but be haunted by the reasons he left town decades earlier.

Grant tries to cheer him up by cooking for him and it does the trick, but Isaac can’t resist teasing Grant just a little about his homestyle way of cooking (cream of mushroom soup and mayo et al). There’s a lot of food in this story (which I’ll get back to in a minute).

It comes out that Grant was married to a woman for many years (he’s now divorced), which causes a minor rift between our heroes since it was Grant’s insistence that they both come out as teenagers that partially pushed Isaac away. They spend one last night in each other’s arms before Isaac drives away the next day.

It’s in flashback that we learn the heartbreaking full story of his difficult family history and why he left Grant behind then, and why he can’t stay now. Like I said earlier, it’s an emotional gut punch, like seriously.

Back in New York a few months later, Isaac is hanging with his bestie trying to recreate the food he experienced in his brief time with Grant. His bestie serves up a reality check. Why is he spending so much time trying to re-create something, when the real thing (the food and the man) is just a phone call away.

Isaac invites him to come for a visit, taking Grant on an admittedly sappy carriage ride through Central Park, where they work out the issues of the past while dreaming up a new future together. Grant has already sold all his stuff in Missouri and is looking to take a culinary leap in the big city.

They’re happy. They’re together. Just like it should have been all along.

God, I can’t even begin to go into how much I just love everything about this story. The heroes are both remarkable, and kind, and interesting.

Second chances is one of my all-time favorite tropes and the way Brandon Witt expertly addresses issues of the past, while showing us that Isaac and Grant are both capable adults able to work through the difficult stuff to get to their HEA, made all warm and fuzzy.

When it comes to the food, Brandon Witt has you covered. All of Grants simple, but tasty, recipes are featured in the back of the book. Yum.

Also, if you happen to be a fan of audiobooks, check out the narration provided by Drew Bacca. Brandon Witt provides the narrative and emotional foundation of the story, but the way Drew handles the alternating narrative viewpoint is really special. He takes the emotion to the next level.

I highly recommend Second Helpings, a wonderful trope-driven romance, that doesn’t skip on the feels.