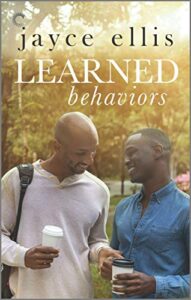 Jaq has just gotten his daughter packed off to college when he gets a message from his boss, Patti Kingsley. Their home and lifestyle brand has just landed a huge account, but Bernhardt wants a holiday exclusive in their stores in time for Black Friday.

Matt, arriving at the Kingsley offices in DC, will be acting as the on-site liaison for Bernhardt and make sure that the development of the new product line stays on schedule.

The stress and accelerated time from of the project has Matt and Jaq butting heads. They drive each other crazy, but that doesn’t mean that they can’t also be attracted to each other.

After working together a while, putting out fires and slowly moving the project forward, they develop a grudging respect, even though neither one of them knows how to deal with the sexual tension that is building between them.

Jaq visits his daughter on parents’ weekend. They hang out with Tanisha’s friend Angela and her dad, who just happens to be Matt. At dinner, the dads catch the vibe that Tanisha and Angela might be more than friends. It’s during this visit that Jaq learns Matt needs to be at his son’s wedding on the day after thanksgiving – Black Friday – which is the launch date they’re struggling so hard to meet.

Jaq takes Matt to a Bernhardt store to get a wedding gift. They almost kiss in the bedding department, wanting to give in to their attraction, the restraint however doesn’t last long. They share a scorching kiss in the parking lot.

Working late one night, Matt finds Jaq in his office. He’s tense and needs some release (if you know what I mean). Matt takes charge, telling Jaq exactly what he wants, and how he wants it. Jaq happily obliges. It’s amazing – mind blowing – and opens up a lot of possibilities for them, maybe even relationship possibilities…

But when Jaq gets home that night, he unexpectedly finds Tanisha there, her heart broken by Angela. He does his best to sooth her. This complicates things between him and Matt, but Jaq’s mom assures him that deserves to have a life.

When he finally finds himself in Matt’s bed, he is not disappointed (again, mind blowing). He knows what he feels – but what does it mean and how would he and Matt work in the long run? It’s definitely not just casual, and they spend the rest of the weekend proving that to one another.

On Monday morning everything falls apart. Bernhardt has rejected the current design, but the nepotistic fool who’s playing office politics behind the scenes is not in the same league as Matt, who does not suffer fools lightly. Once that nonsense is shut down, he goes all the way to Norfolk where his son’s wedding prep has hit a snag. Once he has that under control, he tells his family that there is a new man in his life, so add another ‘plus one’ to the guest list.

The wedding/Thanksgiving weekend arrives, and Jaq manages to temporarily seduce Matt away from his work, adding some playtime to the hectic days ahead, days that Matt spends almost entirely on his phone and laptop. Having to go it alone at a wedding that he’s not even a part of has Jaq rethinking some things. On the morning of the big day they are finally able to talk about Matt’s lack of work/life balance, when Jaq gets a call. Tanisha has had an asthma attack that has landed her in the hospital.

Matt gets dressed for his son’s wedding.

No matter how much they might want to be there for each other, family always comes first.

Tanisha is fine and assures her dad that he doesn’t need to drop everything for her like when she was a baby.

The wedding goes well, but when Angela sees her dad without Jaq by his side because of a “family emergency”, she puts two and two together, and soon father and daughter are headed back to DC to be with that other father/daughter pair that they are undoubtedly both in love with.

The week after the launch (which btw was very successful) Patti gives Jaq a much-deserved promotion. At the same time Matt has decided that he’s done with Bernhardt, to have given them so much, for so long, and have so little to show for it…. the choice is clear. With some help and encouragement from their friends and family, each of our heroes come to realize now that their children are grown, they might finally be able to start a new chapter.

Jaq takes Tanisha to the office Christmas party; which Patti has decorated in the finest of holiday style. She takes to the stage to thank her team when she is joined by surprise guest, Matt. When he and Jaq finally have a moment alone together, they dispense with the mea culpa’s (they were both wrong, they were both right) and go at it like men half their age. Seriously. It’s explosive heat when these two are together.

Everyone is supportive of them. Jaq and Matt are able to move forward as a couple, and as a newly integrated family.

Everything about Learned Behaviors was so deeply satisfying to me as a reader. The way Jayce Ellis created two men, complex characters who have such interesting compelling lives, how they navigate all that in their attempt at romance, all the while generating so much heat that the digital pages crackle and spark… such good stuff.

And combine all that with some delicious tropes – enemies to lovers, office romance, hot dads… it’s all just too damn irresistible.

I fell hard for Jaq and Matt, and feel pretty confident in saying that, out of everything I’ve read in 2020, these two are one of my favorite romantic couples.

And I haven’t really even had a chance to mention some of the amazing secondary characters that help them on their journey to happily ever after. Jaq’s mom is funny and amazing and wise. Matt’s ex-wife seems a little daunting at first, but she just wants what’s best for Matt (and that’s clearly Jaq), and there’s also Jaq’s group of single dad friends who help and support each other – I’m really looking forward to their stories too.

So, I really recommend this book. Jayce Ellis knows how to write a hell of a great romance and I hope that you’ll check it out. I wouldn’t necessarily categorize this as a Christmas story per se, but it does take place during the holiday season, so now is the perfect time to read Learned Behaviors.

This review originally appeared as part of the BigGayFictionPodcast.com.