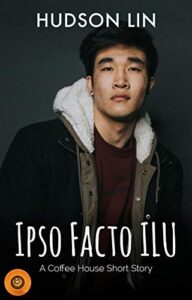 Handsome political pundit and podcaster Jonny Lim is a total Rockstar as far as Brandon is concerned. When Jonny arrives on campus to give a talk, Brandon makes sure to snag the perfect seat, so he can quietly swoon over his celebrity crush.

The next day, Jonny is delighted to find that Brandon has been assigned to give him a tour of the campus. A smart but awkward guy with a passion for political science? Talk about hitting the jackpot. Their day together is amazing, but they must eventually part ways as Jonny’s flight leaves early in the morning.

A storm grounds all air travel and Jonny has no place to stay. Brandon offers up his place for the night. A warm meal and some cuddles and kisses on the couch soon leads to them succumbing to their attraction, Brandon definitely keeping Jonny warm on a frigid Toronto night.

It’s only been a weekend, but both of them have fallen hard. They say their goodbyes (again) with the hope that they might find some way of making this thing between them work.

A few weeks later Jonny makes a big announcement on his podcast, one that that’ll bring them together for a life filled with love, laughs and heated political discourse (which is so not my thing, but for these two it’s a perfect happily ever after.)

I really loved this sweet/sexy contemporary gay romance short story. I particularly enjoyed how Jonny was charmed by nice guy Brandon, whose awkwardness and encyclopedic knowledge of obscure political theory only made him more appealing in Jonny’s eyes.

Ipso Facto ILU by Hudson Lin was originally part of the Rouge Ever After Anthology, but is now available separately as a stand-alone short.