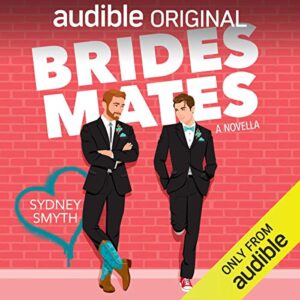 Accused of being commitment phobic, Cooper is dumped by his boyfriend just before leaving for a weekend wedding. Nevertheless, Cooper heads to Montana where he’ll serve as maid of honor (or Bridesmate) for his best friend Lisa, who is marrying her long-time beau Travis.

After arriving in Big Sky county, he is pulled over by the local sheriff’s deputy, who just so happens to be former high school star quarterback and small-town golden boy Will – the guy Coop shared a very sexy kiss with ten years ago, after a Friday night football game.

Cooper is having trouble handling his rental car (it’s a stick shift), so Will drives him into town. On the short ride there he learns that Will is now out of the closet and he will also be Travis’ best man, so they’ll be seeing whole lot more of each other over the next few days.

In a conversation with Lisa involving copious amounts of wine, she asks Cooper that since he and Will are both single, why not have some fun? On their drive, Will didn’t mention The Kiss. That means Will either doesn’t remember it, or it meant nothing to him. A heartbreaking thought since it meant so much to Cooper.

At the wedding rehearsal, Coop and Will are asked to wrangle the ringbearer, Lisa and Travis’ Great Dane, Fred. Once that’s handled, and after rehearsal dinner is over, they share a few tequila shots and a rousing karaoke duet of ‘I’ve Had the Time of My Life’. It’s then that Cooper decides to take his shot and kisses Will. He shoots. He scores. Will invites Cooper back to his place.

After a passionate night together (and a sexy morning follow up), Coop realizes that his commitment issues might be due to the fact he’s been in love with someone for the past ten years. Hint: that someone is Will.

It isn’t until the ceremony that they’re able to talk about what happened the night before. Cooper’s insecurity about that long-ago kiss, and Will’s inability to acknowledge whatever it is that they have, leads to misunderstanding and miscommunication.

The ceremony is beautiful and at the reception, Cooper concludes his bridesmate’s duties with a heartfelt toast about the bride and groom and the joy of ‘finding your person’.

Sick over his missed opportunity with Will, Coop leaves the reception early.

The next morning, driving his rental car to the airport, he gets pulled over again. It’s Will, sleepless and still in his tux from the day before. He explains that Coop left before he could give his toast in which he agreed with everything Cooper said in his speech, and that he ‘found his person before he truly even found himself’. And by ‘his person’, he of course means Coop.

On the side of the road, they share the cutest, rom-comy admission of love. Six months later, we get a brief glimpse of their life together in Montana, and the wonderful things their future holds.

I love a good small-town contemporary romance and Bridesmates delivered everything I could have wanted, and so much more. I also have a soft spot for nice-guy heroes. Cooper and Will are likeable and endearing – a pair of guys that are easy to root for. I also enjoyed the secondary characters, who in their own ways were all working hard to make sure our guys achieved their happily ever after.

This novella has got so much heart and humor. A feel-good read if ever there was one.

Sydney Smyth has crafted a charming small-town, second chance romance and Teddy Hamilton does a wonderful job giving voice to the characters and bringing the story to life.

Bridesmates is an audible original and is available through the audible app and amazon. As of this writing, it is not available in either ebook or paperback formats.