Quick Review: The Case of the Boy in Blue by Amanda Meuwissen 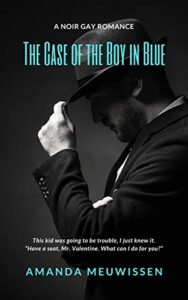 The Case of the Boy in Blue by Amanda Meuwissen

We’re all familiar with the hard-boiled cliché of a troubled dame walking into the office of world-weary private dick. In The Case of the Boy in Blue, instead of a gorgeous blonde, it’s a beautiful boy named Westley Valentine who needs Leonard Quill’s help.

He’s looking to bring Decker, the man who killed his mother and framed his father, to justice. The proof they need is in the basement of a club. That night they deal with some of Decker’s goons and get the photographic evidence they need. Back at Quill’s apartment they develop the film (discretion is important in his line of work) and spend the night in the same bed getting to know each other a little better.

Westley is gone in the morning, has Quill been played for a chump? The kid has taken the photos to the police, which means there’s now a big target on his back. He finds Westley at his ransacked place. Decker is there too. There’s a tense standoff before Roxanne, Quill’s bodyguard/receptionist, swoops in to help take down Decker and his men.

The problem is, Decker was only a small part of a vast criminal network.

Will Quill, Westley and Roxanne continue their fight for justice on these dark and gritty city streets? I sure hope so.

I really loved this short story, told in the noir style of classic detective fiction. I liked the chemistry between the two heroes and I’m dying to know more about Roxanne, the mysterious and gorgeous bad ass.

Now that Quill has solved The Case of the Boy in Blue, I hope there will be more of this intriguing trio’s adventures in crime solving.