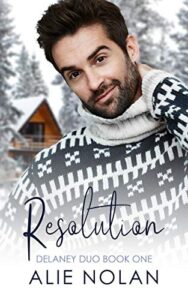 Sebastion (no, I didn’t misspell it) is excited to be spending the new year with his best friend at Dylan’s family cabin in the snowy Colorado mountains. But Dylan’s flight is delayed. When Sebastion arrives at the cabin, he is surprised to find it occupied by Dylan’s incredibly hot father, Devon.

Despite some initial awkwardness, Sebastion finds he enjoys talking to, and spending time with Devon. One night, with a few glasses of wine to loosen their inhibitions, Sebastion gives into his desires and kisses his best friend’s father.

Though neither of them wants to jeopardize their relationship with Dylan, they also don’t regret that amazing kiss. On New Year’s Eve, they have a picnic on the floor of the cabin in front of the fire. They end up talking for hours and, as the clock is about to strike midnight, Devon asks what Sebastion’s resolution is. Begrudgingly, he admits that his resolution for the past few years has been to lose his virginity. Devon takes him to bed, and they blissfully ring in the new year in each other’s arms.

With days spent building snowmen and snowball fights, and nights filled with kisses, cuddles, and plenty of orgasms, Devon realizes that he just might be falling for Sebastion.

After a week of uninterrupted bliss, Dylan finally arrives. While finding his dad and best friend in a romantic relationship certainly wasn’t what he expected, at the end of the day he just wants them both to be happy.

Their relationship with Dylan intact, it’s time for Devon and Sebastion to decide if this is just a vacation fling, or something more. They definitely both want more, and Devon takes his newly designated boyfriend upstairs to celebrate.

A few months later, we find our happy heroes living together. Dylan will be joining them for dinner, but when he arrives, he has his own surprise announcement about his brand-new relationship.

I am powerless to resist any romance that features two nice guy heroes and I was on board with this story from the moment these two met. Devon and Sebastion have a genuinely warm and adorable chemistry together. They were so kind and thoughtful. Once they acknowledged their mutual attraction, they moved cautiously, considering how their relationship might affect Dylan, someone they both deeply care for.

When Devon learns that he’ll be Sebastion’s first, he does everything in his power to ensure that Sebastion’s experience is unforgettable. Like I said… so kind, so thoughtful, and so damn sexy.

If age gap and first times are your go-to romance tropes of choice, then I think Resolution just might be the story for you. This novella is the first part of a duology. Dylan’s story continues in book two, Realization.