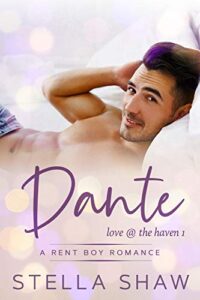 A dilapidated London hotel, The Haven, is home to Dante and several other of his rent boy pals. Rick, the new owner, and his best friend/accountant Blake, want to try and keep the place going. Everyone chips in to make it habitable again and Dante even pulls in a few favors from his previous life (he was an accountant too) to get Rick a business loan to pay for some of the larger repairs.

Blake comes by on an evening when Dante has no other clients – giving them a chance to the explore the undeniable attraction that they have for each other. Their chemistry is electric, and the sex is something they both desperately want and need.

As Dante helps Rick go over some of the books, he is annoyed that he can’t seem to stop thinking about that night with Blake who likes Dante just as much.

When they end up in bed again, Dante is feeling vulnerable after such a loving and vigorously satisfying fuck. He tells Blake about his life and how he’s found himself in this particular profession. It’s more than just sex for Blake, he wants more.

But unexpected news means Blake must move back to Scotland to handle things at his family’s firm. He asks Dante to join him, but he doesn’t see it working out between them and says no.

Rick and some of the other guys give Dante a stern talking to, and he explains that he’s been burned by love and too trusting of men in the past. But the thing is, he cares for Blake than he willing to admit.

He makes a mad dash to King’s Cross station where, amongst the bedlam of holiday travelers, they confess what it is they really want – each other.

In Edinburgh, Dante spends Christmas with Blake and his family. They also make plans for the New Year… and for many years to come.

Romances about escorts can be kinda tricky. How exactly does the author craft a convincing love story when the character’s profession means sleeping with someone other than their intended love interest? It’s a difficult tightrope to walk and I think Stella Shaw does a wonderful job with this story. While exploring Dante and Blake’s sexual chemistry, she not only delves into the physical connection that they share, but the emotional one as well. Falling in love is something completely new for these two men and watching them achieve their HEA is lot of fun to read.

Dante is the novella length introduction to the series, Love at the Haven. Each book focuses on a different member of the found family that call this unique place home.