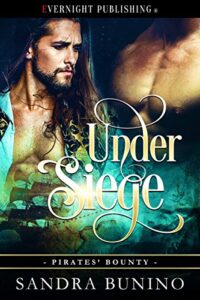 Under Siege by Sandra Bunino

John Siege, found adrift at sea, has been put to work as a deckhand on The Black Devil. His reputation precedes him, and irresistibly handsome pirate Waite wants to know if John was once the captin of The Ghost. He was, but he trusted the wrong person and was cast off after a mutiny by his crew.

But if they were so keen on ridding themselves of him, why can The Ghost be seen just off the horizon? Why are they following him?

Oz, the man who betrayed him and took his ship, wants the treasure that John’s father has hidden away. John was left alive because a clue to its location is the tattoo on John’s back.

The two pirate captains agree to team up. Waite invites him into his bed and submits to John’s expertise. “We seem to make a powerful pair. Both on deck and below it.”

They awake in the morning to find The Ghost flying the white flag of surrender. Oz comes aboard and explains that the crew wants their real captain back. He also tells John that Waite isn’t a pirate at all, but a privateer in service to the crown.

He can’t believe he put his trust in another pirate and returns to his own ship. Once in port, John sets off on his own to find the treasure. Waite joins him and, as they follow the map/clues on John’s back, explains his relationship with the king – less a privateer, and more of an independent contractor who recovers stolen art.

They find the hidden cavern filled with gold and jewels and celebrate with some hard and rough sex, which is just how they like it. A powerful pair indeed.

As one might expect from a pirate story, this spicy short is filled with lusty romance and high seas adventure. It took a minute for John to truly trust Waite, but once he did, they made for a formidable team.

For the heroes in Under Siege, two tempting pirate captains are definitely better than one.