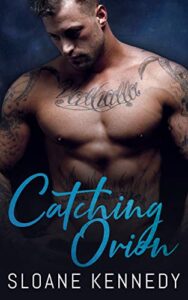 Ryan doesn’t quite know what to think when an enormous, tattooed, and very sexy hunk shows up at his door, with flowers in hand, insisting that they have a date planned.

Knox has been messaging a great guy through a new dating app, the only problem is that when date night arrives, Ryan has no idea who he is. It’s over before it’s even begun.

But they get to talking and realize a shared love of Shrek is just one of the things they have in common. There’s undeniable chemistry between them and they decide to go on the wine and painting class they won in a raffle.

At the event, Knox is shocked to discover that he knows the nude figure models they’ll be using as painterly inspiration. It’s his meddlesome, but well-meaning great uncle who, along with his husband, have created this elaborate scheme to bring Knox and Ryan together.

After seeing his uncles without their robes, Knox decides a change in venue is in order. He and Ryan take his motorcycle to the coast, lay a blanket on the beach, and cuddle up as they watch the sunrise.

This short by Sloane Kennedy has got humor, heart, and some definite heat. Though the evening for Ryan and Knox did not quite go as planned, they were each able to step out of their respective comfort zones and discover something truly special.

Catching Orion is available in ebook, audiobook, and print formats.

This story was previously titled Atlanta and was part of the Heart 2 Heart Vol. 2 Charity Anthology.