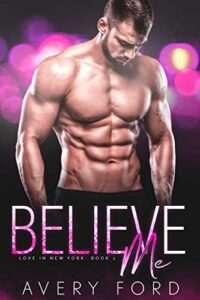 Believe Me (Love in New York Book 2) by Avery Ford

The last thing big, surly, and mostly straight bar-owner Drew Bryant wants to do is take part in a charity bachelor auction. But Alex, Drew’s brother, who is in charge of the event, reminds him that it’s all for a good cause. The auction will raise much needed funds for the LGBT center.

Nice guy Shane is looking forward to the charity event (his best friend is organizing it after all) and Alex asks Shane to bid on his brother, explaining how skittish Drew already is, and it would be just too damn awkward if Drew got up onstage and there were no takers.

The night of the big event, Shane gets in a bidding war for Drew and ends up winning the auction.

They make plans to go on their date the following night. Drew feels a little strange making plans with a guy, even if it is just a “fake” date. But Shane seems nice, and is awfully handsome, so what could go wrong?

As it turns out, absolutely nothing. The dinner date goes perfectly, and Drew finds that he is really into Shane, like really into him. So much so that he even kisses Shane goodnight.

After dropping Shane off at home, Drew decides that one kiss isn’t going to be enough, and texts if he can come over.

Shane says yes. They’re not sure what the chemistry between them means, but it’s not something that they want to deny.

Afterward they make plans for a real date, which goes even better than the first, Drew later spending the night with Shane and intimately exploring the crazy hot attraction that they have.

Alex calls up Shane to see how the date went. Unable to lie to his best friend, Shane ends up telling him just how well things have gone with Alex’s “straight” brother. This prompts Alex to have a serious conversation with his big bro. Alex is fine with whatever their relationship ends up being, he just wants to make sure that neither his brother or best friend gets hurt.

A relationship is exactly what Drew wants, just before Shane decides to call things off. Well, if they’re gonna break-up, then Drew wants to hear it from Shane, face to face. Explaining that it was just the fear of getting hurt, Shane admits that he is really into Drew. And since Drew is really into Shane, everything works out for the best. A short epilogue shows our two heroes a few months into their new relationship. Their first date may have been “fake”, but the love that they share now is most definitely real.

Believe Me is a terrific blend of sweet and sexy romance tropes, featuring two heroes who are likeable and relatable. Though they fall for one another pretty quickly, but Drew and Shane’s chemistry is undeniable, and their HEA is sweetly satisfying.