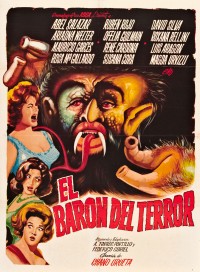 For the uninitiated, The Brainiac (El Baron Del Terror, 1962) may seem less like a south of the border cinematic oddity and more like a trip into a surreal parallel universe. It’s audaciously silly and undeniably weird, but what else would you expect from the country that gave the world the Los Luchadores (Mexican wrestling) subgenre. The Brainiac doesn’t include the heroic exploits of popular cinematic wrestling star El Santo, but then again, it doesn’t need him. The Brainiac is outrageous enough all on its own.

What it’s all about: The fun begins in 1661 as Baron Vitelius d’Estera (Abel Salazar) stands before a masked tribunal for crimes against the people of Mexico. The grand inquisitor reads from an incredibly long list of kinky misdeeds perpetrated by the Baron, who seems mildly amused by the proceedings. He is sentenced to burn at the stake for his crimes.

The townsfolk gather in the field to watch as justice is harshly dealt. A burning miniature in the camera’s foreground is meant to give the impression of a burning pyre, though it’s obvious that the flames come nowhere near the actor playing the Baron. Though the scene is supposed to take place outside, the indoor set is amusingly sparse and about as convincing as the sets festooned with cardboard gravestones in Ed Wood’s Plan 9 From Outer Space (1959).

As a comet flies overhead (an effect achieved using an “animated” out of focus photograph), the Baron calls out to the men who have condemned him. “I shall return to your world within 300 years when that comet completes its cycle and is once again in these latitudes. When that happens, I will take my revenge upon you. I will kill each and every one of your descendants and I shall expunge your foul lineage from this earth!”

Fast forward to 1961 where Ronny and Vicky (Ruben Rojo and Rosa Maria Gallardo) visit professor Millan (Luis Aragon) at his mountaintop observatory. After the professor gives an exhaustive explanation, we learn that the Baron’s comet will be cruising past earth that very evening. Vicky scans the sky with the observatory’s telescope and soon discovers the same shoddy special effect we saw earlier crawling across the heavens. “What a splendid spectacle!” the professor cries.

Meanwhile, a curious driver spots the comet (literally a sparkler in the sky) and pulls to the side of the road just as a giant paper maché rock clumsily falls to earth. As he approaches the iceberg-shaped structure, it dissolves, revealing a hideous space alien. With its hawk-like nose and scraggly hair, the Brainiac is easily one of the most inventive and amusing monsters to ever grace the screen. The pulsating rubber mask and suction cup-tipped hands only add to its low-budget charms. The monster attacks the hapless driver with its elongated forked tongue and swaps clothes with him, its ghastly visage transforming into that of Baron Vitelius!

Ronny and Vicky, investigating the falling star, encounter the Baron on the side of the road. Several long awkward moments pass (as if the actors were waiting for the director to call “action”) before the trio introduce themselves. The youngsters eventually go off comet hunting while the Baron proceeds to a nearby bar where he meets a pretty lady. A flashing stage light is used to represent the Baron’s irresistible gaze. A flurry of bongo drums erupt on the soundtrack as he transforms into the Brainiac and uses his forked tongue to suck out her brains.

The dead bodies end up at the local morgue. “A most astounding thing has occurred in these cases,” the medical examiner explains to a pair of detectives, “The cephalic matter was sucked out through these small openings.”

“A maniac with a lot of knowledge is a threat,” one of the investigators deadpans as they theorize that the deaths may somehow be linked to a recent bank robbery.

The Baron pays a visit to the national archive where, in the basement catacombs, the remains of the grand inquisitors are interred. Later, while strolling in front of a gas station, he encounters a working gal whose brains are just too yummy to pass up. Cue that crazy bongo beat as he transforms and goes on the attack.

Meanwhile, the professor can’t understand how the comet they were tracking could’ve simply vanished from the sky. “We’ve been working for two weeks,” Ronny points out, “and you’re exhausted.” Vicky brings in the mail, which includes an invitation from Baron Vitelius. A party at the Baron’s chi-chi mansion will be the perfect way to unwind.

That evening, the Baron gives the evil eye to each of his distinguished guests as his butler announces their arrival. They are all the descendants of the men who persecuted him 300 years earlier. To assure that the audience fully understands the correlation between the present day guests and their long-ago relatives, the faces of their forefathers are superimposed over their modern day counterparts as each person arrives. This cinematic technique works fine for the male actors since they play both the grand inquisitors and their descendants, but when poor Vicky enters, her face amusingly morphs into that of her unattractive male ancestor.

After attending to Ronny and Vicky, the Baron excuses himself. Sequestered from the prying eyes of his guests, the Baron unlocks a large cabinet to reveal an ornate goblet filled with brains! He daintily uses a silver spoon to eat his fill before returning to the party. The detectives working on the drained brain murders are also on hand to protect the high society guests and their valuables from thieves. The evening ends pleasantly and without incident.

So far, the Brainiac’s victims have been randomly selected. Now it’s time for the Baron Vitelius to truly exact his revenge. The first on his list is a historian (actor/director German Robles). While pouring over some historical texts, they come across the Baron’s own history and he confirms that he is indeed the same man mentioned in the history books. Paralyzed by the Baron’s flashing gaze, the history professor can only watch as his lovely daughter succumbs to the brain-hungry fiend. The professor is also sucked dry before his house is set ablaze.

“These people here were burned,” the detective later says, overstating the obvious. “Only that doesn’t fool me. It’s clear that that madman extracted their brains as well.”

Next, the Baron visits a steel tycoon (director/actor Rene Cardona Sr.) and his wife. The Baron goes on the attack while being shown the man’s laboratory/foundry. The tycoon watches helplessly as Baron Vitelius makes out with his wife, then transforms and devours her. Using his otherworldly influence, he forces the tycoon to step into his own furnace.

Over breakfast, Vicky and Ronny read about the recent deaths in the morning papers. Since the victims were all guests of the Baron, Ronny can’t help but think that, “No matter how hard I fight it, I’m still convinced this Baron Vitelius is a bad omen.”

The detectives also suspect the Baron, but he easily sidesteps their questions. The next person on his list of vengeance is a newlywed bride. When the Baron enters her honeymoon suite, she calls out to her husband, but the bridegroom has already fallen victim to the Baron’s insatiable lust for revenge. Inexplicably (perhaps to break up the monotony of all that sucking) the unlucky groom was hung upside down in the shower and drowned. The bride faints at the sight of the Brainiac and becomes his next meal.

The detectives finally put two and two together when they visit the catacombs, comparing the names there with their current list of victims.

Vicky and Ronny are the next to die!

At his estate, the Baron lures Vicky into a room alone under the pretense of giving her some jewelry. Out of nowhere he declares, “I long to love you and adore you above all, I swear it. But there is no way now. My hate is much stronger than my love, like a matter no one can control.” Ronny discovers the secret brain stash and does battle with the transformed Baron. He isn’t much help and poor Vicky falls into the monsters clutches.

The detectives, who’ve inexplicably arrived barring flame-throwers, proceed to roast the Brainiac alive. The Baron’s plot has been foiled. The smoky, charred remains of the beast turn back into Vitelius before finally dissolving into the Baron’s skeletal remains.

In conclusion: Audiences have K. Gordon Murray to thank for bringing The Brainiac to American movie houses and TV screens in the mid 60’s. The Florida-based producer repackaged and dubbed Mexican product for the U.S. market and became particularly well known for the kid’s matinee titles and horror movies he distributed. Murray rarely copyrighted these films and, after their initial runs in theatres and television, most of them faded into obscurity.

In the public domain for years, The Brainiac was once only available on bargain bin VHS and DVD. Thankfully, Casa Negra Entertainment has released an exquisite version of the film that is sure to please any cult movie fan. The full frame print used for this DVD release is as near perfect as you can get with a film of this vintage. The picture is crisp and you have the choice of the classically campy English dub or the original Spanish language track with optional English subtitles. A text essay details the history of the production and it’s place in the Mexican horror genre. Other features include an interactive press kit, a U.S. radio spot, cast biographies and a small still gallery. There is also a feature length commentary by Kirb Pheeler, a fanboy who watches The Brainiac with all the glee of a devoted fan. While commenting on the more absurd aspects of the film, Pheeler also manages to impart a lot of information detailing the film’s background as well as the various behind-the-scenes players, including actor/producer/director Abel Salazar.

The Brainiac is a blissfully weird and wild ride through the surreal world of Mexican horror movies. Take this cinematic trip south of the border. You won’t be disappointed.