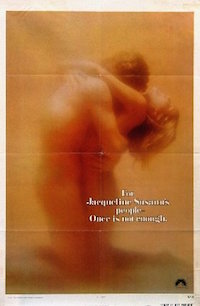 For Jacqueline Susann’s people… Once Is Not Enough.

Based on the novel by Jacqueline Susann, Once is Not Enough (1975) may not be as campy as the previous film adaptations of her best sellers, but scandalous lesbianism, Freudian daddy fixations and a loud-mouthed feminist character that more than resembles the opinionated author herself, means there’s still plenty about it to recommend.

What it’s all about: While his daughter recovers from a near fatal motorcycle accident, down on his luck movie producer Mike Wayne (Kirk Douglas) woos wealthy socialite Deidre Milford Granger (Alexis Smith).

After months of physical therapy in a Swiss clinic, Mike welcomes January (Deborah Raffin) home to New York. As they embrace at the airport, January comments that, “I hope nobody thinks we’re father and daughter. I hope they think you’re a dirty old man and I’m your broad.” They celebrate her return with champagne and caviar as well as a “Welcome Home” message spelled out on the Goodyear blimp.

Mike has another surprise in store and introduces January to Dee, her new mommy.

On a hill in Central Park, January tries to cope with the fact that the man she idolizes has a new woman in his life. “Do you even like her?” she asks.

“It’s difficult not to feel a little something for a woman with all that money, especially when you’re broke,” he tells her, detailing the arrangement he has with Dee. “So, we’re married.”

January visits her old pal Linda Riggs, “The oldest, the ugliest and the smartest girl at school.” At first she doesn’t recognize her former friend.

Linda quickly recites the laundry list of cosmetic procedures she’s had done. “My navel, I’m proud to say, was untouched.” As played by Brenda Vaccaro, Linda embodies the crass, no nonsense, sexually adventurous modern gal that January aspires to be. Shortly after reuniting with January, Linda proudly drops this feminist bombshell, “I’ve screwed every guy in this organization, literally and figuratively, and I gave the shaft to every woman who stood in my way. Now, at twenty-eight, I am the youngest editor Gloss magazine has ever had.”

Later that night, January agrees to a date with man-about-town David Milford (George Hamilton). After an evening spent at a chi-chi nightclub with the “beautiful people”, David makes his move, “Frankly, I’d love to sleep with you.” January puts a stop to the date immediately.

Linda can’t believe that her friend turned down the biggest stud in town. She soon realizes that the only explanation for January’s strange behavior is that she is (gasp!) a virgin. “You’ve got the guilts, it’s like cheating on Daddy,” she theorizes. The only way for January to cure her unfortunate case of virginity and gain some life experience is to get out from under Mike and Dee’s thumb. Linda gives January a job and gets her an apartment in her building. “It’s lucky for you that you’ve fallen into my hands. I’ll teach you everything – writing, screwing – everything!”

January’s second date with David ends back at his place, an unbelievable Matt Helm-style swingin’ bachelor pad. “I wanted it to look like a bordello,” he tells her as a pair of automated drapes reveal a circular bed.

After the deed is done (“I didn’t know men used hairspray,” she says, trying to run her fingers through his hair) they take a cab back to January’s apartment. “David, I wanted to fall in love with you, I really did,” she explains, “If the music, champagne and a round bed couldn’t do it…” Though romance may not be in the cards for January and David, Dee certainly enjoys her afternoon trysts with reclusive international film star Karla (Melina Mercouri).

With a pick-up line like that, how could a girl possibly resist? Linda invites the guys home for a nightcap, but Tom only has eyes for the daughter of his mortal enemy, Mike Wayne. While Linda puts the moves on Tom, January innocently asks if there’s any man she won’t sleep with. “If there is, I haven’t met him.” To escape Linda’s clutches, Tom climbs out the window and up the fire escape to January’s apartment, where he entertains her with drunken platitudes and a semi-respectable kiss. A sappy lovers montage soon details their May/December romance, though taking into account the tremendous age gap (and our heroine’s name) perhaps it should be reclassified as a January/December romance.

The affair creates a rift between January and her father. Mike can’t understand what she sees in the guy. “I’m not looking for a wonderful guy like David, I’m looking for a terrible man like my father.”

“I hate what that man’s done to you.”

“And I’m not exactly crazy about what Dee’s done to you.”

Linda subjects January to some dime-store psychoanalysis, theorizing that her relationship with Tom Colt is simply a result of January’s daddy fixation. “I would be a lot healthier if you just got it over with and went to bed with your father. Why don’t you ask him?”

Linda’s prognosis is right on the money, but without the sexual tension between father and daughter there’d be no movie, so January and Tom head off to the Hamptons for a romantic weekend. Though January tries everything she can think of, it soon becomes clear that Tom has some… well, performance issues. But after a glimpse of January soaping up in the shower, Tom has no trouble rising to the occasion. “That’s the first time I’ve made it in years,” he tells her as they bask in the afterglow of their love. He then proceeds to tell January that, despite the loveless arrangement he has with his wife, he has no intention of getting a divorce.

When Tom is asked to adapt one of his books for the movies, it’s off to Hollywood they go. Their happiness is short lived when Mike bursts in on them and beats the hell out of Tom. Mike insists that January leave Tom and join him and Dee in Palm Beach.

While cleaning his bloodied face, Tom forces January to choose, “I’ve always had a hunch I was just a replacement, now I’ll know… It’s me or daddy, not both of us.”

As Mike flies back to Florida alone, he considers what he’ll have to do to win back January’s love and respect. The first order of business is divorcing Dee. “I married you and I lost her,” he explains as they make the civilized arrangements for the annulment of their marriage.

While in the middle of a mundane lovers quarrel with Tom, January receives word that the charted plane carrying Dee and her father has crashed. Linda, always the epitome of decorum, gripes, “I hate funerals, they depress the hell out of me.”

After dealing with her father’s death and inheriting a sizable chunk of Dee’s fortune, January learns that Tom has returned to New York without bothering to get in touch with her. In a crowded bar Tom gives her the brush off, “You gave a middle-aged guy his last pretense of being a stud.”

“We did have something special didn’t we?”

“Well, once is not enough.”

Heartbroken, January returns to her apartment to find an inconsolable Linda. “First he laid me,” she wails after sleeping with her publisher, “and then he fired me! He said that I was a great lay but that I was a lousy editor!”

After calming her frazzled friend, January goes for a walk and considers the men that she has loved and lost. Cue the montage of happy moments with Tom. But those moments quickly fade to memories of the only man she ever truly loved, her father. A heavenly choir sings the sappy theme song as scenes from earlier in the film are replayed. The movie ends abruptly with January placidly walking through the pre-dawn city streets.

In conclusion: Author Jacqueline Susann was often involved (to varying degrees) with the page-to-screen adaptations of her best sellers, but it was no secret that she was seldom satisfied with the changes Hollywood made to her books. While Valley of the Dolls (1967) and The Love Machine (1971) remain true to the spirit of their source material, there were several cuts and alterations made for the big screen. Though Susann visited the set of Once is Not Enough, she was too ill to shoot a cameo (as she did for the previous two films) and passed away before the film’s premiere. It’s unlikely that she would have enjoyed this adaptation either. Several key subplots and character motivations were truncated, including that of the Karla character. In the film, Karla remains an enigma, appearing in only one scene. In the book, it is explained that Karla uses the money and expensive gifts from her many lovers to care for a handicapped daughter that she has kept secret for decades.

The end of the story was also changed. But as unsatisfying as the end of the film is, the alterations may have been for the better. In the book, after dealing with the death of her father, January gets high, participates in an orgy and tries to jump out a window. She then drives to the beach and disappears, the victim of a bad acid trip, a daddy induced seaside suicide or an alien abduction, it’s unclear which. Susann intentionally left the ending ambiguous, though it bears more than a passing resemblance to the ending of Yargo, a sci-fi novel that Susann had penned several years earlier. The manuscript for Yargo, which was quite unlike the glitzy tell-alls she was famous for, was discovered after her death and published posthumously.

Despite the end result, Once is Not Enough has perhaps the best cinematic pedigree of all the Susann adaptations. The legendary Kirk Douglas certainly adds to the patina of quality, as well as direction by Academy Award winner Guy Green. Green directed the Sidney Poitier film A Patch of Blue (1965) as well as the Yvette Mimeiux melodramas (and Cool Cinema Trash favorites) Light in the Piazza (1962) and Diamond Head (1963). The script was by Oscar winner Julius J. Epstein, the man who penned Casablanca (1945). Brenda Vaccaro, who isn’t usually high on the list of critically lauded actresses, won a Golden Globe for her role in Once is Not Enough. But even more shocking is that she got an Oscar nomination as well!